I'm a long-time Mac OS X developer, going back to the Mac OS X 10.1 Puma fourteen years ago. While my earliest app was a book-cataloging app (R.I.P. Books.app), I've continued to develop for the platform, with some of my latest projects being internal tools to assist Fresh Comics weekly data updates. However, during that period, I remained a staunch Objective-C developer, operating under the theory that I didn't need to jump into Swift until the language progressed to a point that I was being left behind feature-wise with Objective-C. However, given some iOS projects in the pipeline, I decided to give the language a try this evening. I've recorded some thoughts below.

Over the past month, the one activity that I use BLAKE most frequently for is tracking my progress working billing hours in allocated time blocks I've sold clients. This typically involves me keeping my dashboard page open and refreshing the Active Time Blocks to see where my time's been spent and where it should go next:

Given that this graph is what I look at the most, the first feature of the new BLAKE.app would be to make that information available in a more convenient fashion. I decided to build a Mac app with a minimal visual footprint that resided in the system's menu bar and status would be available by tapping the app's icon. The initial version of the app looks like this: 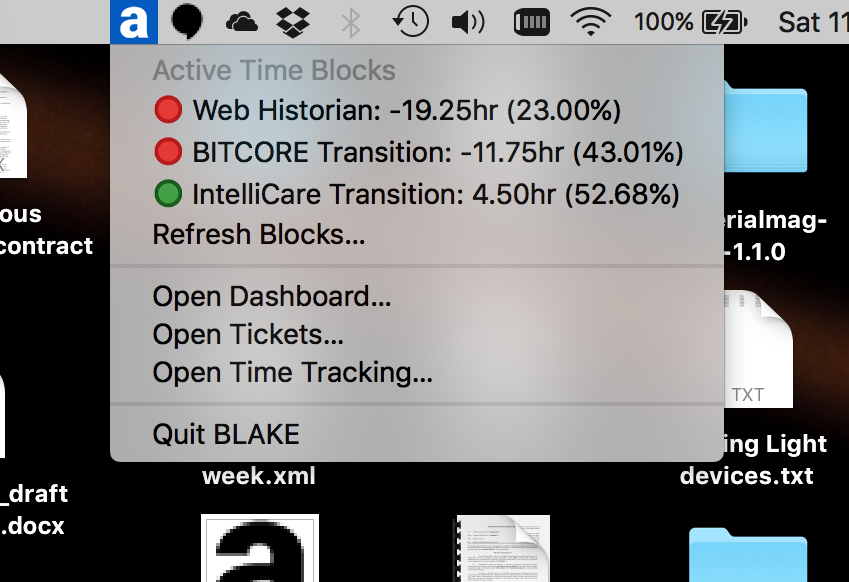 Currently, it displays the active time blocks and indicates whether I'm on schedule (green icon) or behind schedule (red icon). Any of the menu items may be clicked to open up the web page containing the list of current tasks assigned to that time block. The app refreshes its status every five minutes, but the Refresh Blocks… item can be clicked to force a manual update.

This initial version of the app relies heavily on web shortcuts for accessing BLAKE's features. In the future, the app will be extended to implement some of these features natively:

I'll be writing new posts as these features are added.

With the application context out of the way, let's discuss development in Swift. First of all, I didn't get too heavily into class structures in this project as I was able to implement all of the initial functionality in the AppDelegate class. (I'm looking forward to giving its limited namespaces a spin.) The applicationDidFinishLaunching delegate method implements the app's menu by programmatically creating the app's menu by creating and configuring NSMenu and NSMenuItem instances in Swift code. I did not use a XIB or storyboard file to implement any user interface (yet). The delegate launch method ends by creating a NSTimer instance set to fire every five minutes to refresh the menu items.

The remainder of the bulk of the implementation resides in a refreshActiveTimeBlocks method that issues a request to the BLAKE server and parses the received JSON document to build out the Active Time Blocks section of the app's menu. I included some basic error handling that will update the app menu icon to reflect when the app's been unable to retrieve the requested information.

This was a sufficient exercise that allowed me to get my feet wet with some Swift basics. Some initial reactions:


I want to close out this post with a disclaimer that the reactions above are from an old Objective-C coder wading into Swift, and as such, the Tao of Swift may not yet have been achieved (extremely likely). Over the next month, I'll be diving into the user interface side of things as I begin to pull interfaces exclusive to the BLAKE web server into the local BLAKE.app and I'll be documenting my Swift education accordingly.

This is the weblog for Audacious Software, a Chicago company specializing in native cross-platform mobile development and ubiquitous passive data collection.